We took the kids to a program offered by the Birch Aquarium at the SIO pier in La Jolla, which is normally closed to the public.  It is a working research pier used by scientists at the Scripps Institution of Oceanography (part of USCD).  The program started with a tour of the campus (the new Forum building was beautiful, we want to go back there for lunch), and then we got to head out onto the pier.  There were several stations set up at the end of the pier with different activities for the kids and adults to try.  They tried to collect plankton with a plankton net (but the only thing they found was a fish egg), there was a table set up with various shark displays, another table housed the squid dissection, and finally there were several tubs of mussels and rocks they had collected from the sea floor, that Sam in particular spent a lot of time sifting through searching for creatures.

We had a great time, and I particularly enjoyed being out on the pier, looking at the view back toward the coast.  The program started at 7:00,  and we left around 8:30 (it got cold!), and the lights sparkling on the water were lovely after dark.

As a special treat we were given sealed plastic baggies filled with bioluminescent plankton (dinoflagellates) that glow blue and green when you shake the baggie, called a Bioglow Kit.  They should live for several months if we care for them properly (indirect sun to feed them, no extreme temperatures).  The idea for the kits came from marine biologist Michael Latz of the Marine Bioluminescence Lab at SIO.

The Birch Aquarium offers this program throughout the year, it is called the Full Moon Pier Walk (the next is August 30th).  We had clouds on our night, so I think we will have to try it again sometime!  And I would recommend it if you are looking for a very San Diego outing for adults or kids with an interest in marine science.  Check out Emma’s and Sam’s blogs for their posts on our outing. 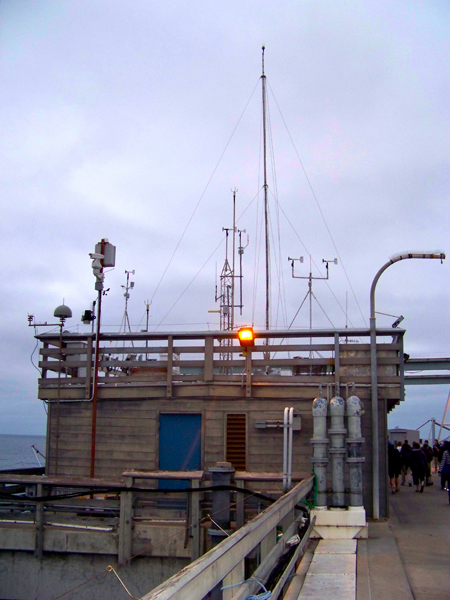 A research building on the end of the pier

The view from the pier as we were leaving.